Citrix MCS on Nutanix AHV: Unleashing the power of clones!

With the release of the plugin for Citrix MCS on Nutanix AHV I got a lot of questions on the inner workings of the AHV cloning so here goes: a blog post that (hopefully) helps you getting a grasp on how Nutanix AHV uses clones in Citrix MCS.

The question that I got: ‘Will Shadow Clones help with Citrix MCS on Nutanix AHV too?’

The short answer to this: ‘No’. The longer answer to this question is that shadow clones is basically built to achieve data locality for multireader scenarios like linked clone technologies as MCS and the View Composer offer which is not the case for Nutanix AHV.

How does this Shadow Clones thing work again? Here’s an image of one of the slides of the slide deck I presented with Martijn Bosschaart at Citrix Synergy (SYN219): 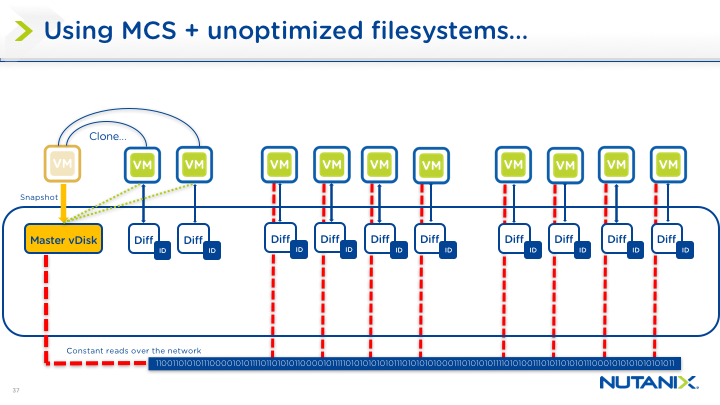 Key take aways on this image:

MCS on Nutanix with vSphere or Hyper-V: 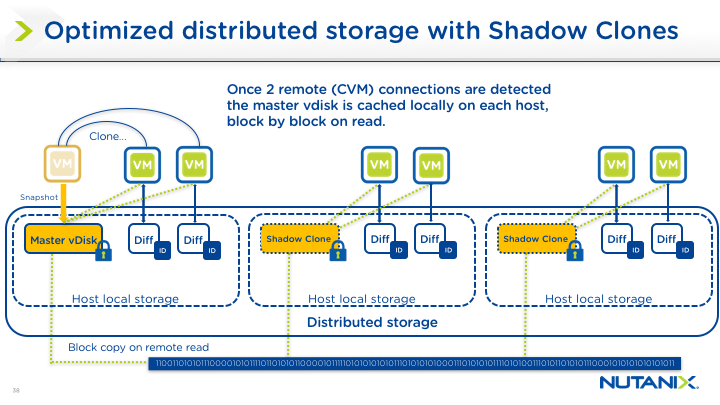 Key take aways on this image:

I can almost hear you think “So why won’t Shadow Clones help with AHV?” First of all, it’s because of the cloning mechanism in AHV: AHV’s cloning is super-fast as it does a VM metadata clone and a disk snapshot. Secondly it’s because AHV is using soft pointers to the master disk, this master disk can be accessed locally to the node because of our implementation of cache locality/extent locality and metadata.

That being said, let’s take a quick look at the disk layout on Nutanix AHV: 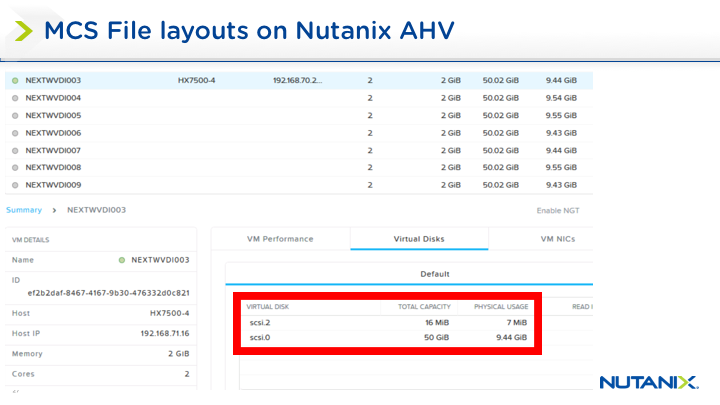 Key takeaways on this image:

The secret sauce here is Copy on Read, this mechanism will cache the reads local to the VM after the first read hitting the master image while this is very storage efficient due to the cache/extend locality it could potentially consume more storage but our data reduction technologies will mitigate this; Michael Webster has some real world examples posted on his blog on the savings you can get in this blogpost:

This solution provides data locality out of the box when it comes down to the cloning mechanisms used by Citrix MCS on Nutanix AHV. If we combine this with the powers of the storage-native actions that we have available on Nutanix AHV with Acropolis and Prism we get a Citrix XenDesktop-on-Nutanix solution that provides a single, high-density platform for desktop and application delivery. This modular, pod-based approach also enables deployments to scale simply and efficiently with zero downtime.