While preparing for the 1Y1-200 and 1Y1-300 exams based on the Exam Preparation Guides released by Citrix I realized that my knowledge of the Personal vDisk was a little bit rusty as I don’t use Personal vDisk (PvD) that often.

After reading the eDocs I noticed that not all possible registry keys were mentioned so I wanted to do a break down on the registry keys for the Citrix Personal vDisk.

Personal vDisks provide separation of data en personalized settings by redirecting changes made on the user’s VM to a separate disk. The PvD is blended to the VM so the user won’t notice the addition of the PvD and thus delivering the same experience as on an oldschool fat client. From the eDocs on Personal vDisks in XenDesktop 7:

Personal vDisks have two parts, which are by default equally sized:

Personal vDisks support the provisioning of department-level applications, as well as applications downloaded and installed by users, including those that require drivers, databases, and PC management software. If a user’s change conflicts with an administrator’s change, a Personal vDisk provides a simple and automatic way to reconcile the changes.

When searching on information about the PvD registry keys I came across this screenshot from, apparently, an older version of PvD:

Moving forward I found the following keys in the different eDocs and knowledge base articles.

I found a couple of the reg keys just from the documentation but it got me wondering if they documented everything. So with the great help from Andrew Morgan who opened up his lab for me I got a Windows 8 desktop with PvD up and running within minutes and took the following screenshot: 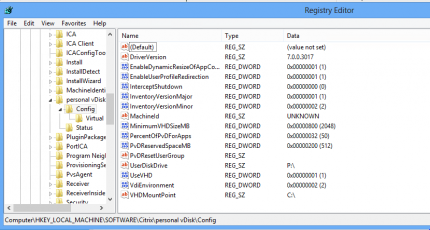 In this newer version of PvD (7.x) there are a couple more registry keys available:

I hope this article helps you understand the available keys in the Citrix Personal vDisk. If you have an addition to this list please leave a comment, I would also love to hear about your thoughts about the educated guesses I did on the registry keys that were missing in the documentation.